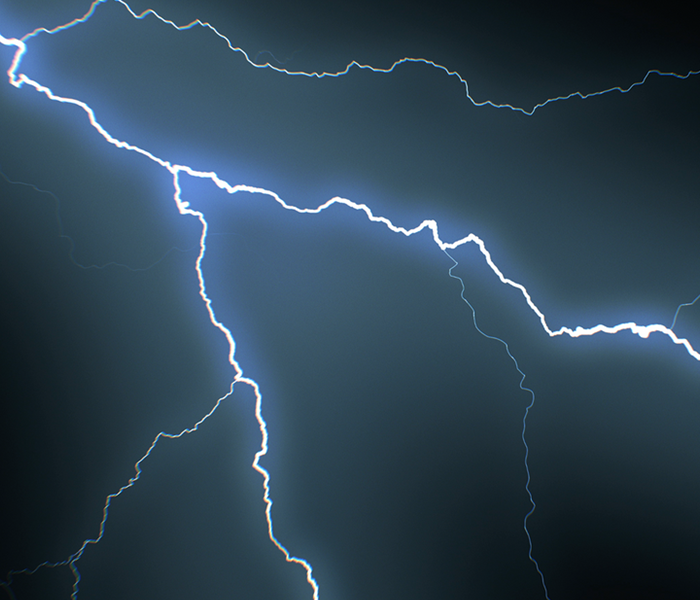 Although lightning is seemingly random, there are some things you can do to minimize if you are caught in the open during a thunderstorm.

Avoid contact with two separate objects. Your body may serve as a conduit if the objects are struck by lightning.

Unsafe places include underneath canopies, small picnic or rain shelters, or near trees.  Where possible, find shelter in a substantial building or in a fully enclosed metal vehicle, such as a car, truck or van.

Avoid proximity minimum of 15 feet to other people. This will allow the current to go to ground more easily and making it less likely for multiple people to be injured.

Avoid being the tallest object. Seek ditches, trenches or the low ground.

Get as low as you can, but don’t lie prone to the ground. Instead, kneel with your hands on the ground in your head low.

Avoid being near fences, light poles and powerlines that lead into areas where lightning is occurring. And electrical charge and travel along the wires and jump to you or cause an injury if you touch live wires or an energized fence.

You do not have to be directly hit by lightning to be affected. Lightning can travel along the ground from a nearby strike to you. You can also jump from nearby objects that are struck.

Don’t plug or unplug anything electrical during a storm.

Don’t use corded telephones. Phone use is the number one cause of indoor lightning injuries in the United States.

If a person is struck by lightning, call 911 and care for the victim immediately. You cannot be harmed by touching the victim after they have been struck.

Swimming pools, indoor and outdoors, are connected to a much larger surface area with underground pipes, gas lines, electric and telephone wiring. Lightning strikes to the ground anywhere on this metallic that work making shocks elsewhere.

At the first sign of lightning or thunder, swimming pools and beaches should be evacuated. Seek shelter inside the main building, or in a fully enclosed vehicle with the windows rolled up .

Get out and off the water if there are signs of lightning.

Stay away from doors and windows.

Do not use the telephone.

Turn off, unplug, and stay away from appliances, computers, power tools, and TV sets.

Avoid use of showers or other contact with water. Because water may travel through and on pipes and tubing, lightning may strike exterior electric and phone lines, including shocks to inside equipment.

Fully enclosed metal vehicles such as cars, trucks and vans with windows rolled up to provide good shelter.